Chlorine in Drinking Water
The Good, the Bad & the Ugly News
by Nancy Hearn, CNC The addition of chlorine in drinking water has been the standard in water treatment in the United States since 1904.

Thus, for over 100 years we have trusted and relied on chlorine to purify our water and kill off any waterborne pathogens.

The good news is that adding chlorine in drinking water has done a good job of killing off most microorganisms.

In fact, the United States has one of the safest water supplies in the world, and I am truly grateful for this.

Without chlorine (or some other form of water disinfection treatment), millions of people would die from devastating infections such as cholera, salmonella, and others.

The Bad of Chlorine in Drinking Water

The bad news is that chlorine treatment does not absolutely ensure that by the time our drinking water comes out of our home faucet it is free of unhealthy microorganisms.

Dangerous bacteria (such as e-coli and coliform) are still found in chlorinated tap water on occasion. When this happens it is primarily due to problems related to the treatment system itself or to the transport of the water to our homes.

Thus, relying on chlorine disinfection alone is a false guarantee that the water from your tap is safe to drink.

Even minimal exposure to these types of bacteria can cause symptoms similar to the flu, such as headaches, diarrhea, cramps, nausea or vomiting.

Thus, I highly recommend a tap water filter at the point-of-use (your water faucet) to ensure adequate filtration of unhealthy micro-organisms, as well as other many other contaminants, that could end up in your drinking water.

The Ugly Side of Chlorinated Drinking Water

The ugly side of chlorine in drinking water has only recently been documented.

And it has to do with the long-term health effects of chlorine and its disinfection by-products (DBPs).

What the studies have found is that chlorine itself is not the main problem; rather it has to do with what happens when the chlorine mixes with any type of organic matter in the water.

In the 1970s scientists discovered that when chlorine is added to water, it forms Trihalomethanes (THMs), one of which is chloroform. THMs increase the production of free radicals in the body and are highly carcinogenic (cancer causing).

Chlorine and THMS have been linked to various types of cancer, kidney and liver damage, immune system dysfunction, disorders of the nervous system, hardening of the arteries, and birth defects.

Negative Effects of DBPs and Chlorine

Unfortunately, we are learning the hard way that our attempts to prevent illness by adding chlorine in drinking water has contributed to another problem—the increase of cancer and heart disease. Check out what the experts have to say:

“Cancer risk among people using chlorinated water is as much as 93 percent higher than among those whose water does not contain chlorine,” according to the U.S. Council of Environmental Quality.

According to the BreastCancerFund.org,“One common factor among women with breast cancer is that they all have 50 to 60 percent higher levels of these chlorination by-products (THMs) in their fat tissue than women without breast cancer . . .”

"Long-term drinking of chlorinated water appears to increase a person's risk of developing bladder cancer as much as 80 percent,”as documented in a study published in the Journal of the National Cancer Institute. Some 45,000 Americans are diagnosed every year with bladder cancer.

But drinking chlorinated water is only half the problem. Bathing and showering in unfiltered tap water is just as bad as drinking it, according to the Journal of Public Health and numerous other scientists and doctors. See "Chlorine in Tap Water - Why Use a Bath and Shower Filter?"

A Better Way to Disinfect Water

The primary reason adding chlorine to water for disinfection has become so widely accepted is not because it is the safest or most effective way to disinfect water — it is the cheapest.

Is there a better way? A handful of cities such as Las Vegas, Nevada, and Santa Clara, California, have begun treating their water through a process called ozonation. It is more expensive for the city, but the side effects are minimal.

Ozonation is a step in the right direction for these large cities and I would like to see other cities follow their example or find other non-toxic disinfection solutions.

For those of us who don’t live in these cities, there are a few options. The most powerful and cost-effective way to get chlorine-free water is to invest in a whole house water filter or to purchase a drinking water filter and/or bath and shower filter for your home.

Do you know what happens when you put a small amount of chlorine into a fish bowl?

All the fish die. That is why fish tanks come with a de-chlorinator. So then, why are we drinking and showering in this chemical that kills another organism in a matter of hours?

Chlorine in Tap Water - Why Use a Bath and Shower Filter?

Return from Chlorine in Drinking Water to Water Contaminants 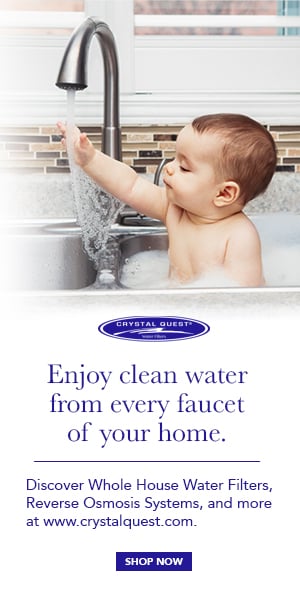