Perrier Mineral Water
Is It Healthy or Unhealthy?
by Nancy Hearn, CNC 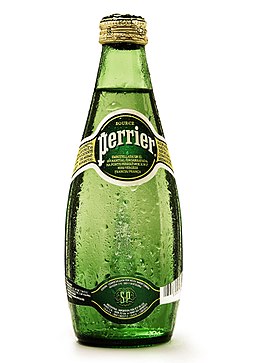 Perrier water comes from a naturally carbonated source in France.

Perrier mineral water is a type of carbonated water (also known as sparkling water or fizzy water). It is a French brand of bottled mineral water that is captured from a spring in Vergèze, a commune in the Gard department in southern France.

What makes Perrier mineral water different from other bottled sparkling water is that the spring water where it is derived is naturally carbonated.

However, the water and carbon dioxide gas are captured from the source separately and the water is then purified.  The carbonation as CO2 gas is then added back to the water during bottling so that is matches the carbonation level at the spring.

A Bit of History

In 1898, a local doctor by the name of Louis Perrier bought the spring and opened a spa there.  He later sold the spring to a wealthy British visitor, St. John Harmsworth.

Harmsworth eventually closed the spa and started bottling the water in the aesthetic green bottles with the unique teardrop shape.

In 1990, a U.S. laboratory found benzene, a known carcinogen, in several bottles, which ended up in a recall of 160 million bottles of Perrier.  Nestle company bought Perrier in 1992, but Perrier had lost its market dominance after the contamination episode.

In general, drinking Perrier mineral water or any other sparkling water should not replace your daily quota for mineral-rich filtered drinking water.

We recommend drinking no more than one small bottle of Perrier mineral water a day.  And of course, since it is still water, it will help with hydration.

Drinking water that is slightly alkaline (7.0 pH or higher) is more conducive to promoting health in the body.  Perrier water is acidic (less than 6.0 pH)

Perrier carbonated water is certainly healthier than most other carbonated beverages, especially sodas, which are much more acidic and contain high levels of sugar and other artificial additives.

Thus, if you enjoy carbonated beverages, drinking Perrier mineral water or any other sparkling water that does not contain added sugar, artificial flavorings, or salt is ok to drink on occasion.

Perrier comes in several flavors, including lemon and lime, as well as ginger-cherry, peppermint, orange-lychee, raspberry, and ginger-lemon.

Sparkling water, in general, is recognized as safe to drink, but the CO2 in the water can cause bloating and gas, especially for people who already have digestive disorders.  People with ulcers should also not drink carbonated water.