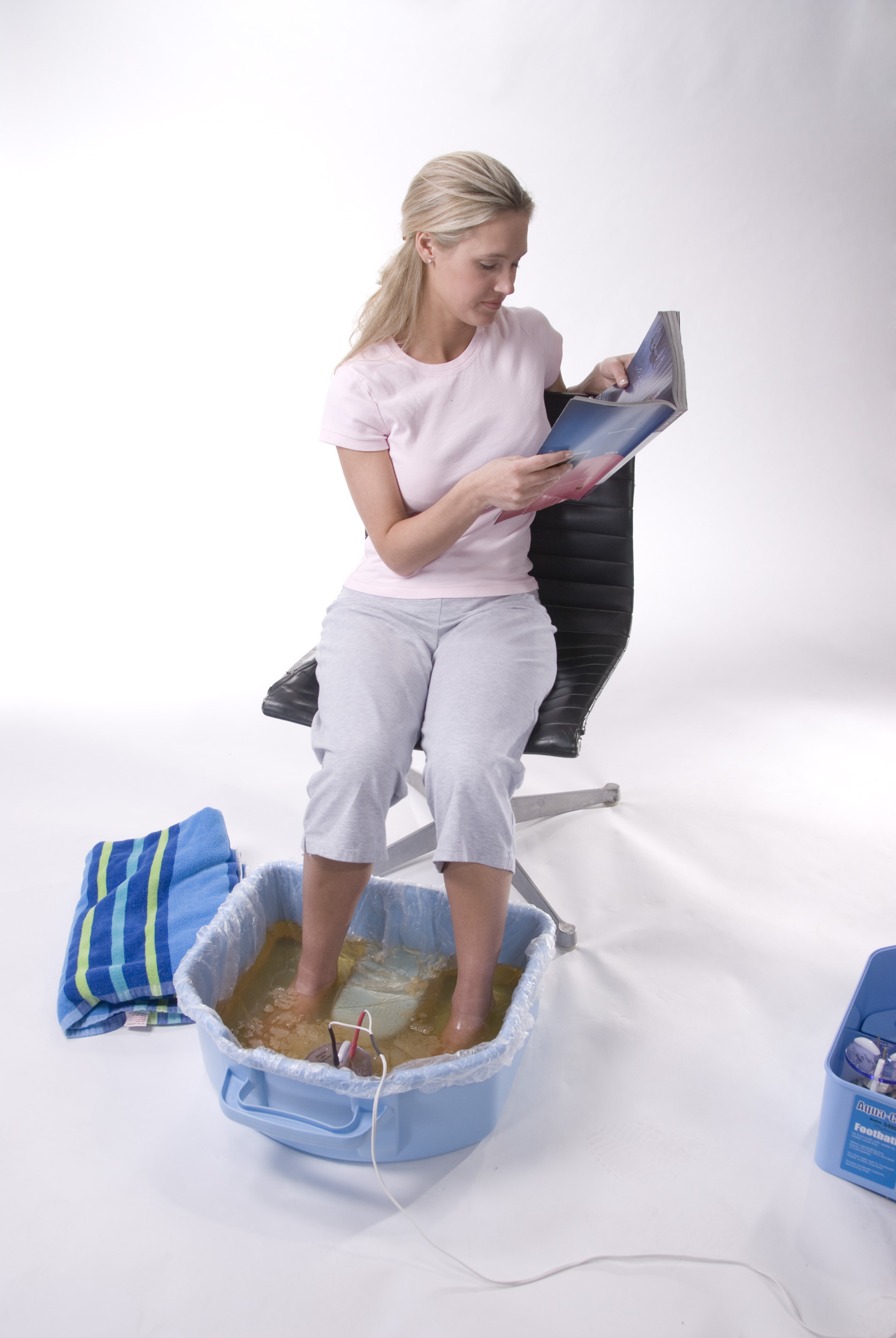 I first learned about the ionic foot bath detox over ten years ago, when I worked at a health spa in Montana.

I was skeptical about the effectiveness of the foot bath and was even more concerned about the safety of it, since the treatment involves using an electrical device in a tub of warm water while the person soaks his/her feet.

So I asked many questions, thoroughly researched the foot bath device, and observed results with customers.

I also listened to their feedback when they came back for further treatments.

What I found out was that even the most skeptical people often admitted they experienced noticeable benefits after a single ionic foot bath detox.

Just a few of the most consistent comments included (1) more energy, (2) pain relief of all types , (3) mood enhancement, (4) and better sleep.  In fact, on several occasions, we had customers tell us that they slept soundly through the night for the first time in months or years.

What Is an Ionic Foot Bath?

A foot bath detox involves the use of an electrical device that generates ions in a tub of water while the person soaks his/her feet (see image above).

The session usually lasts 25 to 40 minutes, allowing the electric charge and negative ions to permeate the water.

According to Michael Evoy, health advocate at AquaChiFootbath.com, the ionic foot bath “combines the life-giving properties of water with a specialized bio-electric charge, which enhances and amplifies the body's ability to heal. . . .

"The negative ions created during a session are similar to those found in hot springs and other naturally charged water sources known to be beneficial to the body.”

When a person has an ionic foot bath detox session, the clear water progressively turns color—anywhere from a light orange to a murky brown-black.  On occasion, the person will feel a tingling sensation during the foot bath.

Many people have been told that the change in water color is due to toxins being released from the body into the water.  In fact, we had a color chart in the health spa where I worked, which was supposed to indicate which organs the toxins were coming from.

As Evoy states, “Although we would all like to have an occasional ‘magical bullet’, detoxification of the body cannot take place via a magic vacuum cleaner, sucking toxins through our feet.”

The fact is that the change in the color of water from the ionic foot bath is primarily caused by the process of electrolysis acting on particulates and minerals in the source water.

Thus, the water will be slightly different in every geographical area since the source water will be different. Having said that, all things being the same (the water source, the settings, and duration of the foot bath), I definitely noticed a difference from person to person in the color, consistency and odor of the water. In some cases, the water smelled so bad, it was almost unbearable to dispense of.

Thus, I concluded from my own experience and observation that the debris, foam, and odor found in the water after a foot bath session were, in fact, indications of toxins being released in some form.

Many people also noticed a change in urination and bowel movements for a few days after the foot bath.

For people who want scientific proof of whether anything that shows up in the foot bath is from body detoxification, I haven't found any credible documentation, even though I have heard studies have been done in other countries (outside the U.S.)

However, I believe the greater benefit of the ionic foot bath has to do with its energetic and alkalizing effect on the body.

Our bodies are bio-electric organisms. When our “batteries” are run down, our depleted cells are not able to assimilate nutrients and remove toxins as efficiently.

The ionic charge of the foot bath gives the body a recharge, in a sense, and enables the body to do what it does best--regeneration, restoration, and revitalization.

According to Oncology Specialist Christine Adamo, LAc, one of the main points of the foot bath is to make the body’s pH more alkaline. She is a supporter of the best quality ionic foot baths and uses them in her practice, particularly with cancer patients to help with the side effects of chemotherapy.

In general, the more acidic one’s body, the more toxic it is. Testing one’s pH before and after an ionic foot bath has shown to increase alkalinity.

According to Pamela M. Seyler, NHD, AAMA, “True detox footbaths lower toxins and increase pH in the body, thus inflammation is lowered, the immune system is freed up to do its job and behave normally and all of this is a big piece of the most foundational kind of healing.”

In my experience, most people will benefit from an ionic foot bath detox.  It is especially good for people chronic fatigue, skin conditions, headaches, gastrointestinal ailments, joint pain, and circulatory issues.

Cautions:   The ionic foot bath detox is not recommended for people who have a pacemaker or open cuts or sores on their feet. People with degenerative diseases should use precaution and consult with a doctor before using.

A few years after working at the health spa, I started my own health center and researched all the different ionic foot baths on the market, which ranged in price from about $199 to $1600. I wish I could have found one for $199 that was just as effective and safe, but no such luck.

I purchased what I believe is still the highest quality ionic foot bath detox on the market, called the Aqua Chi foot bath (manufactured in the United States).

Why the Aqua Chi foot bath model vs others?

Editor's Note: In the past 5 years or so, there have been several Chinese knock-offs of the Aqua Chi, which are not the same quality. So do not be fooled.

Return from Ionic Foot Bath Detox to Benefits of Hydrotherapy