Icebergs as a Fresh Water Source
by Nancy Hearn, CNC 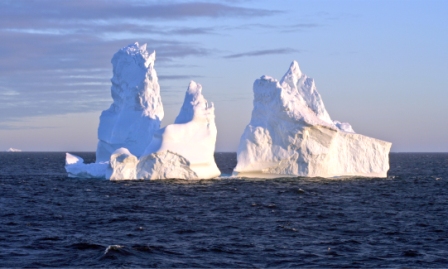 The idea of using icebergs as a fresh water source is not new. Nearly 70 percent of the Earth’s fresh water is locked up in polar ice caps.

Since world population is expected to double to about 12 billion in the next 50 years, it makes sense to start planning to use other fresh water resources.

A good-sized iceberg contains about 10 to 30 billion gallons of fresh water. And yes, it is fresh water.

Even though icebergs float in the salt water of the ocean, the ice is compressed snow and does not contain salt.

Melting the ice and then filtering the water of possible contaminants would produce clean drinking water for many people.

Thus, the concept of towing huge icebergs, mainly from the Antarctic region, has been considered for many years.

The main way considered on how to use icebergs as a fresh water source is to:

Even though experts have determined it is technologically possible to tow icebergs, there are definite challenges to consider.

The first challenge is prevent the iceberg from melting along the way.  The movement of water over the iceberg would cause it to melt fairly quickly.

Thus, the iceberg would have to be wrapped and insulated.  This would require a very strong fabric to withstand the elements and a huge amount of it.

In addition, it would certainly be hard to wrap the iceberg below the water since a big iceberg is hundreds of feet deep.

The second challenge is getting the iceberg anywhere near land, again because of the underwater size of the iceberg.

The third major challenge has to do with the high cost that it would take to tow icebergs as close as possible to the land where it is needed and then to figure out how to harvest the water with minimal loss.

According to Research Gate the overall idea for towing icebergs as a fresh water source is feasible and should be explored further.

Another method that has been considered, which makes a lot more sense to me, is to mine icebergs in the Arctic and fill supertankers with ice shavings.

At this time, modern tankers could hold about 100 million gallons of water.

Even though that is only a fraction of the amount of water contained in a large iceberg (which is about 20 billion gallons of water), it is still a lot of fresh water.

It seems to me that it would be much less expensive and easier to transport fresh water to many different parts of the world as needed.

Science: How Stuff Works; What If People Wanted to Use Icebergs as a source of Fresh Water?