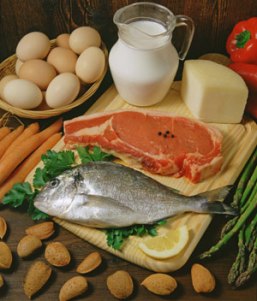 Health conscious people want to know the most important foods to buy organic.

Organic foods are generally priced higher than non-organic, and many people cannot afford to buy all organic foods.

In addition to the higher price, in smaller cities and certain parts of the country, organic food is hard to find or the quality is poor. Thus, it is helpful to know the highest priority of organic foods.

According to HealthCastle.com, the three most important foods to buy organic are meat, eggs and dairy products.

Even though other health resources list 12 fruits and vegetables (the "dirty dozen") as the highest priority foods, I tend to agree with Health Castle that the greatest concern is with non-organic meat, eggs and dairy.

Contaminants in the non-organic sources of these foods include antibiotics, pesticides from animal feed, as well as added growth hormones.

Organic meat, eggs, and dairy come from animals that are raised on a diet that does not contain fertilizers or pesticides. In addition, they are not given growth hormones or antibiotics.

According to the Environmental Working Group, the following fruits and vegetables contain the highest levels of pesticides and other chemical-based contaminants, even after being washed.

Many people think that if they use a produce wash, it will remove these pesticides, but this is not true in most cases.

Pesticides are oil-based and will not wash off with food-safe soap and water.  The produce wash would have to contain some type of oil emulsifier to remove the oil-based chemicals.

If you can just buy the above foods organic, you are doing fairly well. The following list of foods are the next level of importance for buying organic.

If you have a hard time remembering these specific foods when shopping, just know that if the fruit or vegetable has a thin, delicate skin, buy organic. Thicker skins retain less chemical residues.

Thus, some of the fruits and vegetables with lower level importance include the following:

Other Foods to Buy Organic

The following are other foods that you may want to buy organic for the reasons listed:

The Dirty Dozen: 12 Foods You Should Buy Organic; EatingWell.com; 2016.

Return from Foods to Buy Organic to Water Nutrition