Side Effects of Gripe Water
for Infants 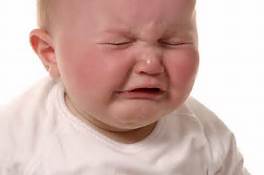 Even though gripe water for infants has been around for over 100 years and has been known to be effective for relieving flatulence, teething and “minor tummy upsets,” giving it to a baby also has its risks.

Just a few of the potential side effects of gripe water include allergic reactions, stomach issues related to the herbs, tooth decay, and hormonal changes.

The original formula was banned in the U.S. because of the alcohol content.

So called "healthier” gripe water formulas are available today that use natural ingredients and do not include alcohol or sugar. Regardless of the formula, the following are possible side effects.

Some of the side effects of the herbal extracts used in gripe water can range from mild skin rashes or upset stomach to severe allergic reactions.

For example, even though chamomile is generally considered safe, allergic reactions in infants can lead to difficulty in breathing and throat swelling.

According to a study cited in the Journal of the Royal Society of Medicine, the herbal extracts, sweetener and sodium bicarbonate in gripe water can be potentially harmful.

Sodium bicarbonate is in most gripe water formulas and is not recommended for infants.

It is an antacid (an alkali) that can temporarily relieve discomfort from an acidic stomach. However, if used consistently, it can disrupt the stomach’s natural acidity needed to digest food.

Disrupting stomach pH can also lead to risk of infection and impair utilization of nutrients.

The chemical makeup of fennel extracts is similar to that of estrogen. As a result, ingesting the extracts over time can cause hormonal changes and affect sexual development.

A study published in the Journal of Pediatric Surgery conducted on the side effects of gripe water suggests that when fennel plant extracts are consumed for a long duration, it can result in premature breast tissue development.

The amount of sugar and other sweeteners used in gripe formulas increases the risk of cavities and other types of tooth decay issues, as per the study in the Journal of the Royal Society of Medicine.

Since the relief associated with gripe water is purportedly due to the alcohol and sugar content in the original formula, the “healthier” formulas that do not contain sugar and alcohol may not be as effective.

Yet these formulas still have the risks related to the herbs and bicarbonate soda.

Thus, we don’t recommend giving gripe water to infants except as a last resort and only under the supervision of a pediatrician.

Journal of the Royal Society of Medicine; The Gripe Water Story; 2000.

Livestrong.com; What Are the Side Effects of Gripe Water in Infants? 2014.

Journal of Pediatric Surgery; A striking and frequent cause of premature thelarche in children: Foeniculum vulgare; 2008