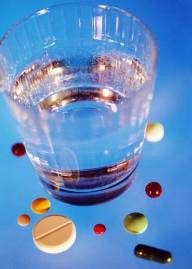 Trace amounts of pharmaceutical drugs in drinking water have been found in many U.S. cities. These drugs can potentially affect our health and well being in many ways, especially in the long-term.

A recent study with fish found that diluted concentrations of some of the drugs found in drinking water (mainly antidepressants) affected hormonal changes, appetite, mood, sex, and even genetic mutation.

The research is just starting to gain momentum, but the EPA and other health organizations do recognize it as a serious concern.

This article will address how these drugs enter our drinking water, the possible and tangible effect on our bodies and environment, and what we can do to limit our pollution and protect our health.

How the Drugs Get Into Our Drinking Water

When we take a medication, only about 20% of this pill will be digested and the other 80% will be unused—excreted from our bodies and turned to waste.

Until recently, scientists and the Environmental Protection Agency did not recognize the trace amounts of pharmaceutical drugs in drinking water as a serious problem.

A study was conducted on the fish in the Potomac River, near Washington D.C., that showed signs of them having both male and female characteristics, where estrogen was found in high levels.

More studies were done and diluted concentrations of chemicals, mainly antidepressants (1.8 mg/l), were found to affect the mood of fish species, the sex of the fish, an increase in eating, and even signs of genetic mutation, associated in humans with autism.

How These Chemicals May Affect Our Health

Detractors have said that these chemicals in our drinking water are in such small amounts, usually in the millionth or billionth percentile, that they won’t affect humans in the same way that they affect fish.

They say that the human processing system is much more advanced than animals.

They also reason that since these chemicals were specifically made for humans, they won’t affect us the same way they do the fish.

While the short-term effect of ingesting these drugs in drinking water does not seem to be a major concern to scientists, many are still worried about the long-term effect.

Scientists are also worried about the effect this water will have on pregnant women and their developing babies.

The concern is that these babies, while in the womb, are much more susceptible to chemicals entering and affecting the brain, due to a leaky blood-brain barrier.

What We Can Do

Even though the research is not conclusive yet about the effect these drugs in drinking water have on human health, most of us would rather not be ingesting any amount of medications that we don’t need.

However, Sarah Janssen, a science fellow at the Natural Resources Defense Council, says that charcoal filters and reverse osmosis are the most effective filters studied so far.

Reverse osmosis water is demineralized and not recommended for long-term use.

Thus, investing in a multi-stage, carbon-based drinking water system for your home is the best way to protect yourself and your family from ingesting these drugs. Check out our drinking water filter recommendations.

Another way we can protect ourselves and the environment is by not flushing our unused or unneeded medications down the toilet.

Instead, mix them with coffee grounds or cat litter (something an animal wouldn’t eat) and throw them in the trash.

Return from Drugs in Drinking Water to Water Contaminants