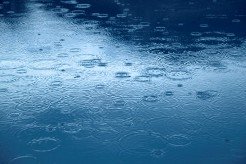 Drinking rainwater that is filtered can help conserve water

As the cost of water rises and our water supply shrinks by the day, people around the world are finding solutions for conserving water, such as drinking rainwater.

For us city folk, it sounds kind of gross. But in fact, rainwater is pretty clean and does not contain most of the contaminants found in groundwater.

Millions of people in developing countries are drinking rainwater. They will usually collect it in a rain barrel or cistern.

This water is cleaner than most of the nearby water supplies that might have been contaminated by waste or pollution. However, it still contains some pollutants and bacteria.

Rainwater is a collection of the atmosphere in the area, and pollutants from hundreds of miles away can be spread quite easily. The collected rainwater will often contain plant parts, soil, algae, bacteria, insect parts, and sometimes radioactive material from the air.

If you are thinking of drinking rainwater, it is a good idea to have some sort of filtration device to deal with the air-borne contaminants.

The filtration techniques and devices can be simple or complex, depending on how the water is going to be used and how it is regulated.

Sometimes a simple sand filter can suffice. A sand filter sounds counter-intuitive, but it is actually one of nature’s most effective water filters.

The basic concept is that you have a barrel with a layer of water on top, a middle layer of sand, and then a bottom layer that will emit the filtered water. You pour water into the top, and the microbes in the top layer of water will eat away many of the pollutants and contaminants.

Several feet of sand will do the rest, collecting particles as the water siphons downward and leaves a fairly clean water sample on the bottom. (Only the smallest of organisms and particles will not be filtered).

Certain countries, such as Germany, have gone a step further and implemented a national standard on the filtration of rainwater.

In the late 1990s, several hundred thousand rainwater utilization installations were implemented. Over time these filtration devices have been improved, saving the people using them a lot of money and energy.

Households using rainwater as potable water, using one of these filtration devices, are saving approximately 50 percent.

Australia is another country that is focusing hard on how to save rainwater and be more efficient with our ecosystem.

Any new building constructed in Australia is required to have a rainwater filtration system in place.

Rebates are offered to encourage the builders to use them in some of the dryest states, such as Queensland. The rebate will usually pay off the total system.

The Relationship Between Energy Use and Water Use

The CEO of Rainwaterhog, Sally Dominguez, from Sydney, Australia, visited the U.S. to promote her product line. When asked what she saw as the difference between Australia’s rain use and that of the United States, she said:

“Primarily what stands out for me is the per person water use in the U.S. You are about three times our personal water use. A five-minute shower is a dirty word at Sydney dinner parties. Most everybody aims for four minutes or less.

"Yet at one of the seminars last week more than half the room had showers longer than ten minutes! And the lawns! You just don’t see lawns in Australia unless the owner has access to well water or lots of rainwater.

“I think in the U.S. there is still a sense that the country can afford for all its citizens to use as much water as they like, that this is a constitutional right.

"The major positive difference is the recognition in the U.S. of the direct relationship between energy use and water use. This is not something that is ever mentioned in Australia.

"Perhaps because we don’t have the whole aquifer thing going on and we are not transporting water as far as you are from say Northern California to Southern California. But here you have energy authorities pushing for water conservation in order to save energy. I like that, pressure to conserve is twofold.”

Time for the U.S. to Start Collecting Rainwater for Conservation

I think her comments hit home and are easily apparent. In the U.S., many people water their lawns frequently, for example, and do whatever it takes to keep them green, without much apparent concern for water usage. A green lawn is just part of the status quo.

In fact, in the U.S., we use over 410 gallons per day for our basic needs. This water does recycle itself somewhat, but clean water is still a shrinking resource.

I think it would be a good idea for the U.S. to take a closer look at the advantages of collecting rainwater for drinking and other water uses.

Other countries are taking measures to conserve and be more efficient with this precious resource. It is about time we catch up.

Harvesth2o.com; Harvesting Rain Down Under

For more information on using and drinking rainwater, see:

The Complete Guide to Water Storage: How to Use Gray Water and Rainwater Systems, Rain Barrels, Tanks, and Other Water Storage Techniques for Household and Emergency Use (Back to Basics Conserving)