The Benefits of Himalayan Salt
by Nancy Hearn, CNC 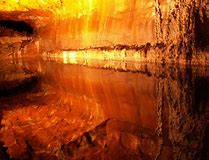 Himalayan salt mine in Pakistan.

The health benefits of Himalayan salt may include better circulation, lower blood pressure, water regulation in the body, and the support of normal blood sugar levels.

Himalayan salt is one of the purest salts found on earth since it has been protected by hardened lava within the Himalayan salt beds for hundreds of millions of years.  It is usually hand mined from caves in Pakistan near the Himalayas and can be purchased in its unprocessed natural form.

Himalayan salt is a type of rock salt that is known for its pink color, which comes from its rich mineral content, including magnesium, potassium, and iodine.  The salt contains 80 plus minerals and other natural elements.

In general, salt is essential for maintaining almost every metabolic function in the body. It is especially vital to nerve conduction, water regulation inside and outside the cells, as well as the absorption of nutrients and the removal of waste.

The following are just a few of the traditional health benefits of Himalayan salt that have been attributed to its use:

Is It True that Salt Is Salt?

Most of the benefits of Himalayan salt have yet to be scientifically proven. In fact, some medical research suggests there is little difference between using unrefined Himalayan salt and regular white table salt.

Some even say that salt is salt. However, with or without scientific proof, I believe the difference is significant.

Refined white table salt is highly processed and has zero nutritional value. In fact, the salt is processed with chemicals and dried at extremely high heat (1,200 degrees F.), which changes its chemical structure.

Thus, when you compare the mineral-rich, unrefined, pure Himalayan salt to white table salt, which do you want to put in your body?

The average American consumes way too much salt—approximately 3,400 mg of sodium chloride per day, according to the Center for Disease Control and Prevention.

The recommended amount for adults is to consume less than 2,300 mg of sodium per day.

It is evident from numerous medical studies that limiting salt intake is essential for optimal health.  However, we need to consume some salt in its natural form for numerous reasons, especially for water regulation in the body.

Thus, if salt intake is critical but only in small amounts, it makes sense to me that we should get the highest quality salt we can get. Unrefined Himalayan salt is far superior to table salt in nutritional value and purity as well as its taste, according to numerous culinary experts.